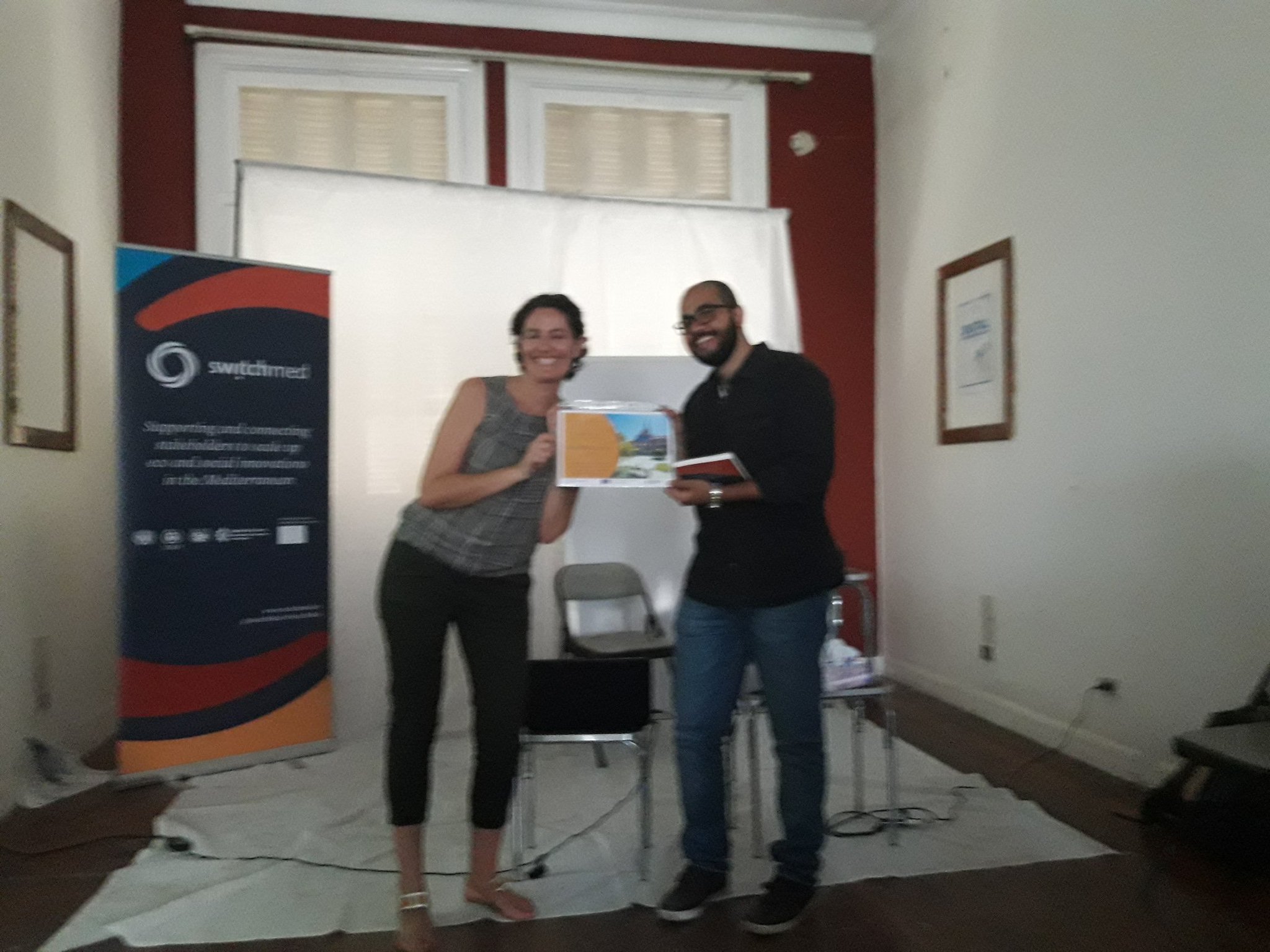 Green Entrepreneurs Prove it at Egypreneur Club; Switching to environmentally-sustainable business is a winning economic & social strategy for Egypt

Before we start, I have a confession to make: while being known for my business ventures in internet/technology/media/finance/business services, by education and academic degree, I’m a Mechanical Design & Production Engineer.

At almost 17 years of age, representing my first company at an entrepreneurship expo following The Art of Business Creation Workshop

Pursuing my natural tendency to choose an adventurous entrepreneurship path early on, I became an entrepreneur as a freshman at my engineering school and had been one since then. My Academic background didn’t in any how influence the type of ventures I choose to associate with to the extend that I have seen it as totally irrelevant, but probably this time and for the first time, working with Green Startups, I enjoyed being a production engineer as it allowed me to understand the underlying operations and potential impact of these green ventures on a deeper level.

Last Thursday, August 3rd, Egypreneur Club at Talaat Harb Square – currently on soft opening mode – hosted “Green Startups Meet Investors” event organized on behalf of the EU’s SwitchMed Programme; a program dedicated to assisting Green Startups in accessing capital and support services needed to scale their ventures. The event featured 7 entrepreneurs pitching their business for feedback from stakeholders, who had been generous with their insights during and after the event.

Egypreneur Club, Talaat Harb is hosting a few follow-up meetings between entrepreneurs, investors and stakeholders who found some of these projects interesting. If you find any of the ventures below relevant to you, please, do get in touch, would be glad to introduce you to the entrepreneurs to discuss partnership.

Personally, I admired all the project ideas and was very delighted to see sophisticated solutions to real-life problems that is either already implemented and seeking growth capital or getting very close to commercialization. A stage in which I was able to work with the entrepreneurs on what my previous 12 years has been about, turning a great idea/concept/product into a great company.

Mr. Ahmed Ismail, or the Patents Designer as he describes himself, pitched Malek for Food Dehydrators. With a registered Intellectual Property and wide recognition for its innovative approach and possible economic impact. Ahmed’s startup builds and distributes a device that dehydrates fresh fruits and vegetables at farms for easier and cheaper transporation and consumption.

“40% of Egyptian vegetables/ 35% of fruits go to waste mainly due to high transport cost, while 6 million ton of Egyptian tomato crop go to waste that lead to up to 130 million m3 methane gas emission to environment and forms great loss for both of farmers income and many of natural resources as water, land, fertilizers, energy also labor and capital that go to produce food that no one consumes”

Malek’s device tremendously brings down the price for the final consumer while retaining the nutrutious value of the fresh foods – while also increasing the income of small farmers. Mr. Ahmed brought samples of dehydrated foods created using his device to be enjoyed by the attendees. Unexpectedly for me, the dried Mango and Bananas tasted as the best types of fresh fruits you can try.

Ahmed continues to seek the right financial and business partners to boost the commercialization of his invention by producing and distributing the device at scale for Egyptian farmers and beyond.

Mr. Magdy Sharaf takes the economic impact of recycling to the next level by mixing fiberglass and hardened cartoon fabric remnants to form a new material with better physical/mechanical properties – the material, which has an Intellectual Property registered – allows Mr. Magdy’s startup El Wady for Fiberglass to produce various products that’s up to 3 times cheaper than its alternatives and has even better and more durable features, products include but not limited to Street Lighting Poles, Doors, Outdoor Boothes, Caravans, Furniture and more…

In case you are a fequent visitor to one of Cairo’s most popular mega malls, City Stars, you most likely have slowed down to take a look at an Advert on a street bump on your own in or out of the parking lot. This Advert is developed by Mr. Magdy’s new material and developed by El Wady for Fiberglass for one of Egypt’s top Ad agencies.

So far, El Wady for Fiberglass has fulfilled over 15 purchase order with a value approaching 1 Million EGP for only 2 of its products developed using the new material, being, Street Lighting Poles and Doors. Its clientele included entities like Egyptian Ministry of Interiors, Real Estate Developers, Building and Construction Companies, NGOs. Yet, despite all this success, El Wady is forced to decline majority of purchase orders they are receiving now as their small factory runs out of capacity to deliver on large purchase orders.

El Wady is looking for expansion capital now by moving from the small factory – where they have achieved all their success into a much larger production facility where they can scale their operation and spend further on building an organizational structure that allows the business to scale.

The company defines its Total Addressable Market (TAM) in Egypt only to be 5 Billion EGP, competing head-on with manufacturers and suppliers of Street Lighting Poles, Doors, Furniture and more. The company expects to dominate 5% of this market in its first year upon receiving the needed funding and expand to 15% and 25% in following years.

I saw Magdy’s El Wady, just like I saw Ahmed’s Malek, truly disruptive models for very large markets across different industries and its success takes the practice of innovation and entrepreneurship in Egypt to a more real and mature level, moving beyond apps and tech and looking in-depth at serious problems the community is facing where innovation and entrepreneurship can have serious social and economic impact.

While majority of startup investors and funds in Egypt continues to focus exclusively on tech startups, and those who don’t, continue to require an exaggerated level of maturity for the startup, I’m sure there are plenty of intelligent investors who can bring lots of business acumen to the already successful implementations of smart innovations.

I had to go through discussions that got heated into debates with the entrepreneurs who complained about receiving only superficial support mostly in the form of recognition and celebration and that investors have overlooked their pitches because they were no flashy internet-tech startups, I had to argue on behalf of investors for a second chance on pitching to local investors, before heading to international finance opportunities.

Ahmed El Masry’s story is no different, realizing that only 5-12% of household waste in Egypt is getting recycled and that Egypt consumes 10 million tons of organic fertilizers annually while producing only 3 million tons locally – Ahmed’s Hand2Hand started getting down to business to fill the 7 million tons organic fertalizers market gap relying on the unlimited resource of recycleable raw materials from household waste.

In an impressively sharp pitch, Ahmed presented to the audience the logic and numbers of how he sees the problem and realizes the solution within reach.

Hand2Hand has already started the construction of the digester device necessary for converting waste into organic fertilizers. The company is raising 20,000 Euros to finish the digester construction, purchase the hardware necessary for managing the supply chain of organic waste and launch awareness campaigns to promote household waste segregation.

Four other entrepreneurs has presented impressive companies being Vwaste, turning dried fruit (especially Orange) peel into Pectine that can be used across industries. EatWater which builds a device that clears food from any causes of cancer using nanotechnology. Tadweer which seeks to disrupt the supply chain for the waste collection ecosystem in Egypt by providing professional and consistent waste collection and segregation services. And last but not least Shamsia Space which supports the economic backbone of Suez as a main industrial hub in Egypt by launching a number of entrepreneur-empowerment initiatives including a co-working space and a maker space in Suez.

After seven impressive presentations, the audience had plenty of feedback to share, that’s when an extended networking period started for entrepreneurs to receive feedback from stakeholders

During the networking break, scoring sheets that attendees had during the pitches were collected in order for SwitchMed team to do the math and calculate the highest score achieved through the socring grid which included variables such as Pitch Quality, Business Model, Scalability, Solution Proposed, Key Success Factors and Clear Green Impact. Vwaste was announced as the winner of this year’s SwtichMed Content in Egypt and the team will travel to Barcelona in 2018 to present its business on the global SwitchMed event.

As we are also in the process of launching our membership program for Egypreneur Club in Talaat Harb Square, I was glad to announce granting all 7 entrepreneurs Premium Membership at Egypreneur Club, Talaat Harb. Turning the event venue from a one-time event into a permanent hub that will retain and expand on the energy created to coach, support and help Green Entrepreneurs access capital and support services they need.

Upon the request of some of the participating entrepreneurs, who considered her to be the first person to believe in them and provide them with real support. Prof. Ghada Amer, Vice President at Arab Science and Technology Foundation was invited to share her feedback with attendees, providing eloquent, constructive and inspiring feedback to all participating startups.

Following my previous post Is it time to Switch towards Collaborative Consumption and Production in Egypt yet? – I stand corrected that these entrepreneurs and their startups have already initiated a movement towards economically, socially and environmentally more sustainable approaches towards life and business in Egypt.

It remains a challenge for these entrepreneurs to persist against all odds to bring their projects to life on a reasonable scale and to be able to endure the challenges and lack of “real” support and often the superficiality of startup celebrations versus the real needs for these projects to turn to be fruiteful. Something that entrepreneurs has agreed that the SwitchMed program has done a very good job in raising their capacity to be able to deliver a convincing pitch and presenting their projects in such a way that will hopefully help them in raising the needed capital and acquiring the support services needed.

Representatives from Egyptian Ministry of Investment and International Cooperation, Egyptian Ministry of Trade and Industry joined alongside representatives from UNIDO, Sekem, Knowledge, Sawiris Foundation for Sustainable Development to put together the best ending for the event by a group circle discussion during which entrepreneurs’ spirits were boosted, energy renewed and the feedback they needed, was delivered and digested.

Something we are committed to continue doing and repeating at Egypreneur Club as a hub for acknowledging and supporting entrepreneurs who challenge their surrounding circumstances to achieve greater social and economic impact for themselves, their beloved nation and the world at large.