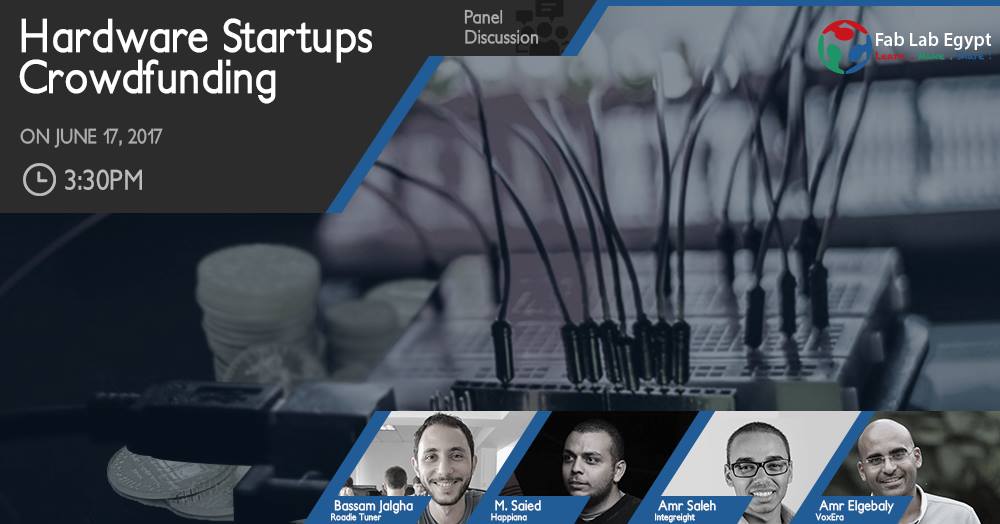 Crowdfunding campaigns are one of the best ways to validate your products, especially if you are a hardware startup. For the followers of the Lean Startup Methodology – which should be everyone building a startup – you know you should be iterating the launch of your product while receiving feedback from your customers.

Crowdfunding provides the ideal medium to achieve this dynamic, yet sometimes it could be the kiss of death to a new startup if the process is not managed properly. And what’s better than other people’s experience, failures and successes to learn from while pursuing your own journey?

Inspired by the panel discussion on Hardware Startups Crowdfunding by FabLab Egypt; this article will introduce you to the storie and lessons learnt by hardware entrepreneurs who used Crowdfunding as a medium to develop their products and build growing businesses based on the initial success or failure of their Crowdfunding Campaign.

If there is enough interest, we’ll publish a follow-on article with Checklist and Score Card that will help you score your campaign and suggest ways to increase the potential of success based on the input shared by the entrepreneurs. Feel free to comment below is something like this would be helpful to you.

By the end of 2013, Bassam Jalgha’s first bootstrapped Kickstarter campaign (Roadie Tuner: the ultimate guitarist tool) attracted 2,002 backers who pledged $178,613, four years later, his company, Band Industries, attracted 4,741 backers who pledged $502,931 to its second Crowdfunding campaign (Roadie 2 and Roadie Bass Automatic Instrument Tuners), Bassam joined the panel live from China as he is working on delivering the product before the holidays.

Amr El Gabry is the Founder of VoxEra – The First Voice Roaming Killer, its Kickstarter Campaign recently attracted 633 backers who pledged $75,551 and in the process of launching their product.

Mahmoud Said of Happiana had less luck with his SunBank – The World’s Smartest Solar Charger Campaign on indieGogo despite successfully raising $3,000, the target for manufacturing the product had been $15,000 and you can’t go flexible with manufacturing, though, it seems the campaign has had a positive impact as his company recently completed a second pivot and was able to raise a seedfunding round to continue their operation.

Amr Saleh’s 1Sheeld: Replace your Arduino shields with your smartphone! campaign had been one of the inspirers of the Hardware Startup movement in Egypt, attracting 1,480 backers who pledged $85,210 and successfully delivering on their promise, Amr’s Integreight is getting ready to launch a second campaign soon.

Below are some of the top tips shared by the founders

The core component for the success of the campaign is proper design to the marketing funnel and a combination of persistence and intelligence in designing conversion points, as digital marketing practices mature, the process for online conversion becomes widely known yet the need for specialized professionals to run the campaign persists.

According to the founders the main tools they used for their funnel and conversion is:

Prior to its campaign launch, Bassam’s Band Industries launched a Free App targetting the same niche, providing a taste for their upcoming product and attracting 10,000 leads, plenty of whom will then contribute to the Crowdfunding campaign later.

Bank Industres also hired an advertising agency that was able to generate $60,000 worth of revenues for a budget of $15,000 relying on Facebook Leads Forms, the cost of acquisition for a lead had been $0.2 and the conversion late was expected to be 7%. Bassam stresses on the fact that digital marketing is more about data than marketing, once you know what to measure and the ratios you’ll be able to make the right calculations and investments.

But the journey was not the same for Amr El Gably who fired his marketing team after the first few days of the campaign. They spent $2000 and acquired only 500 leads, only resulting in 50 purchases. VoxEra also used a smart pre-campaign $1 committment guranteeing super early bird prices, for which 100% of those who paid the $1 ended up contributing to the campaign.

Using Advertising Agency or Not

Amr has then moved between marketing agencies, investing $1500 for a return of $1500 with Gadget Floor, then $2500 with Funded Today which pulled back from the campaign for poor projected performance and another $2500 with PR Media Now  which didn’t also proceed in delivering results. Founders stressed that the reviews for Marketing Agencies could be very positive and also very negative sometimes, achieving the chemistry with an agency had been a challenge for Amr.

El Gably’s quest for results relying on agencies came to a disappointment, bringing matters back to his own hands, Amr reached out to influencers, offering a local travel blogger a 10% profit share and using an Affiliate marketing module, results started showing. For $100 boosted post by the blogger resulted in $5000 direct revenues to the campaign.

Media didn’t end up working well for VoxEra’s campaign as well. Amr stresses that timing for media appearances is critical, a duration of 7-10 days between media appearances have not scored well with the audience, these apperances should be schedule in a short span of time, communicating momentum and urgency to convince hesitating audience to commit. People wait to see what happens after each interview, whey they wait a few days, they lose interest.

Media outlets are growing less interested in idea-stage crowdfunding projects, giving the large number of projects that doesn’t deliver and accordingly affects the credibility of the media outlet, verification by testing the product is becoming essential to securing media coverage for your campaign. This was the case for Mahmoud, after trying sevearl routes, running out of funds while results are not  showing. That’s when his Fab Lab Membership kicked in to provide the supportive community, network, knowledge and insights he needed to move further. Mahmoud strongly recommends entrepreneurs to assemble a support system before launching.

You’ll never get it all right on your own just sitting there with your laptop. Opeaning up and reaching out to the community of peers, mentors and fellow makers is essential for success.

Integreight’s geeks don’t like to leave it for chance, the team studied 70 Crowdfunding case studies before launching their own Crowdfunding campaigns, accumulating a repository of know-how fo what to do and not to do, which tools to use, when. It all came together when the team has chosen to participate at TechCrunch Disruptin Berlin prior to their campaign launch and was able to get the TC coverage and generating momentum from there.

Despite that his campaign was not a success, the first experience of launching a Crowdfunding campaign had been invaluable to Mahmoud’s business. Since then he syndicated a “Not To Do List” listing everything they have done that didn’t work. Another reason why such community meetings are invaluable is the cross-sharing of the not-to-do lists among founders and making it available to the next generation of founders.

Providing on your promises, while efficiently handling negativity online

Another challenge these campaigns face is the effective handling of negative comments from audiences and backers who often lack the understanding of the process, challenges and flexibility required while working with startups. As an Application release gets slightly delayed, and one of the backers resorts to negativity and bad mouthing which could be a source of stress and possible mis-handling of the situation.

Keeping your cool, demonstrating the situation and terms of engagement with options to proceed often turns down attention-seeking negativity-seekers. In this case, someone initially posting negative comments turned down the offer to get a refund and showed flexibility in accepting the terms.

To keep its backers updated, VoxEra even decided to take it further and hire staff to make direct phone calls to 633 backers. When people receive a personalized phone call, it feels better and more trusting and engaging for them while you are working on fulfilling their expectations.

How to Protect your idea

Founders seemed to agree that it’s almost impossible to fully protect your idea, in some cases during the campaign on one platform, other groups post the same product on another crowdfunding platform. Or larger companies often copycat the products and launch it before the end of the campaign.

Some ways to gurantee your own success if to focus on:

Several options exist for getting a provesional patent, providing a protection for 12 month and starting only at a few hundred dollars, PatentWizard.com was mentioned as an option, though it was debated that using local legal advisors might be more engaging and cost effective.

Mahmoud’s experience with his first Crowdfunding campaign have taught him to listen carefully to the customers and design the offering and communication based on their needs and expectations. “Never compete on price, find a niche segment and serve them with a specific product” says Mahmoud. As a result of listening, Mahmoud decided to focus on 2 different customer segments and needs other than what was initially anticipated.

Choosing timing for Launch and Certification

It might seem promising to launch a campaign – from the scratch – but it’s highly advised by the founders never to launch a campaign before having a minimum of a prototype you can sell. Taking the risk of launching before producing a working prototype might destroy the whole process and affect you negatively.

4X of the cost of production should be the minimum pricing for hardware products, there are too many unforseen source of waste, re-design, cost of campaign .etc that needs to be factors in the pricing to avoid loss before making revenues.

The above are a few variables mentioned by the founders in their panel discussion. It’s not hard to build a step-by-step process to launch your own campaign then:

As part of The Growth Manifesto, I have built a number of score cards to benchmark the startup/company performance and growth potential based on researched variables. If it’d be of interest to the community, I’d be glad to invest the time to design a specific tool for Hardware Startup Crowdfunding, comments below if this would be helpful to you.

DISLAIMER: Information shared is based on the insights shared during the panel discussion, if you’d like to revise any segment, please, feel free to contact us.